Learn how to protect your retirement savings.

IN AMERICA — FIND OUT WHY

6 Signs Your Portfolio Could Be in Trouble Soon 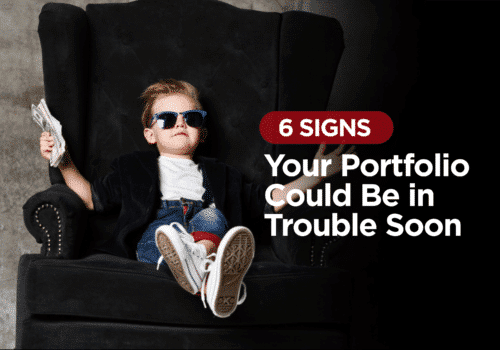 As an investor, a big portion of your portfolio is likely in stocks, so the health of the stock market matters to you. Many investors are trying to predict the market or identify market trends, but this is a highly subjective exercise. Very few do it well enough, and no one has a track record of always buying at a market bottom and selling at the market top. However, fortunes are made not by being perfect but by being methodical and knowing a few things about risk–reward.

As we’ll see below, the only thing that’s certain about the stock market is that it has always been alternating between good and bad periods — each period inevitably comes to an end before the next period begins.

But each period varies in length and significance, and we only know in hindsight when each cycle started and the previous cycle ended — a good period will turn into a bad period with no notice, and vice versa.

However, we can look at some signposts that seem to indicate where we’re headed to, but let’s first look at the stock market cycles historically.

For the last hundred years, the stock market has gone through long phases of good and bad. The bad times generally coincide with major national and global events (for instance, the Great Depression and WWII), while the good periods seem to come in the aftermath of these events (the post-WWII recovery, etc.).

Take a look at the chart below, which shows the good periods (green boxes) and the bad periods (red boxes) in the stock market over the past 111 years.

At the end of good periods, nearly everyone is invested in stocks. At the end of bad periods, investors say they will never buy stocks again. The two experiences are vastly different, but while in the middle of one experience, you wouldn’t feel like the other one existed or can exist — until the tides turn.

The longest bad period included the Great Depression and WWII and lasted nearly 20 years with no real returns (-0.5% annualized) and three enormous drawbacks: -79%, -50%, and -49%. The second-longest bad period lasted over 16 years through the 1960s and 1970s and also had three major corrections, the largest of which was -52%. Since then, the most significant drawbacks were the dot-com crash (-47%) and the housing crisis (-52%), with annualized real returns of -8.8%.

The more consistently the market is moving up, the more it attracts new investment and leverage, which further propels valuations up. It’s a positive feedback loop, and investors forget everything they’ve been taught about risk and risk management. Exuberance and complacency are at their highest.

This is the environment we are in now.

Since 1982, we’ve had only one bad period — the rest of the time, the stock market has mostly gone up. And this is key to understanding the mentality among many investors today: They have only ever seen the market go up, or, the few times it has corrected, they have seen it recover sharply, like after the 30% pandemic-related correction in March 2020.

But if good periods represent rising stock prices, then the last 12 years have been the best of all periods because stock markets have been rising consistently. This unprecedented consistency has created the appearance of certainty. “Stocks always go up” is the mantra of Redditers and meme investors.

And the continued fiscal and monetary support from the Fed and the government is the accomplice fueling this belief: Since the housing crisis, the Fed has been printing money more or less non-stop and bailed out the markets whenever there was a sign the bull was running off a cliff.

So, if you accept that we are in a definite good period for stocks, the question is how close are we to its end?

The price-to-earnings (P/E) ratio of the S&P 500 is a valuation metric that shows how the price of a company’s stock compares to the company’s earnings. When the ratio is high (over 25), the stock is considered expensive.

We are currently at an all-time high for companies in the S&P 500: The ratio is a staggering 32.7. If you take a look at the chart below, you’ll see companies tend to be heavily overvalued right before bad periods in the stock market. But valuations just tell part of the story. For all we know, they could climb higher before they crash. So, let’s look at other signs of the exuberance in today’s market — signs that we’re not in the middle of a bull market but towards its end.

6 signs the bull market is near its end

Towards the end of a bull market in stocks, questionable assets typically appreciate as investors, caught in the market frenzy, seek new avenues to profit from the market. Here are some examples of what we’re witnessing right now:

If you take 10 seconds to look at Tesla, you’ll notice something fishy. In April, Tesla was trading at 949 times earnings. Not to mention, this is a company that has a market cap that is almost as large as the next seven car companies combined, including renowned giants such as Ford, Toyota, and Volkswagen — all of which have been in the business much longer than Tesla and produce many more cars.

By now, you probably already know about the Reddit situation with GameStop. A group of people got together and financially destroyed hedge funds that were shorting weak companies with failing business models, like GameStop, by boosting the price of their stocks by more than 8 times, giving them a false sense of value. The actual move has toyed with market sentiments.

So, while this did show the power of the “little guys,” it should be cause for concern as another one of these “attacks” could end up taking down the entire market.

Bitcoin has gone up almost 800% since it’s low in March 2020. As a highly speculative asset, the surge is indicative of the speculative nature of today’s investment environment. On the day of writing this article, a major correction in Bitcoin is happening. A major crash in Bitcoin could drag the entire stock market with it as big institutions have entered the crypto investment world, and, if it falls, they will need to sell “good” stocks to cover their losses.

4. Non-fungible tokens (NFTs) are getting attention

NFTs are unique crypto tokens that give ownership of digital assets and can be traded. An example is the digital art collage from Beeple that was sold for $69.3 million at a recent Christie’s auction. It’s a digital file, not a tangible asset. It’s available to everyone to view (not in its full resolution). And it sold as the third most expensive piece of art ever.

Let me make this clear: someone spent almost $70 million for the ownership rights to a digital file, not a tangible art piece they can show off on their wall. They basically bought the bragging rights to a code series of 1s and 0s.

SPACs are investment vehicles using a loophole to take a company public before it meets the criteria to go public on its own. SPACs have created a frenzy where companies are raising funds from eager investors. All of this hot air is putting Wall Street and your portfolio at risk.

6. Companies lose it all in unbelievable blowups

If you watch the stock market closely enough, especially before a crash or correction, you’ll notice that there are companies that lose it all while everything else seems to be great. In March, for example, Viacom and Discovery quickly lost half of their value, blowing up the $10 billion family office Archegos.

“It is highly likely that we are going to have another situation like that,” said Scott Minerd, global chief investment officer of Guggenheim, which manages more than $275 billion in assets.

These are all signposts pointing to the state of today’s stock market. What will eventually trigger its downfall, no one knows. It could be a large hedge fund or bank blowing up, a financial crisis in another country, a geopolitical crisis, the crypto market crashing… Inevitably, though, the market will go down. It’s a mistake to think this 12-year bull run is normal or sustainable.

And when that happens, no one is large enough to stop its fall. Every cycle has its “good” reason why it cannot crash:

They were all wrong back then. Is it possible they are right today?

Today, investors have been lulled into complacency because the stock market has rallied through every risk thrown its way for more than 12 years. The narrative is that the Fed won’t let the market crash. But it’s a false narrative — the Fed simply won’t be able to stop the next crash as it has no tools left in its toolbox.

Why the stock market frenzy could spell trouble for your portfolio

One asset you want to consider for your financial future is gold. I’m always happy to sing the praises of gold, but as a reader of our blog, you’re probably already familiar with the benefits of gold as an investment.

You’ll also know that gold and silver are probably the only assets that aren’t in a bubble. If investing in assets that have lots of growth potential is important to you, then silver is the furthest from it’s all-time high. So, in addition to protecting your retirement savings from the next stock market crash and from inflation, gold and silver have lots of room to grow.

Do you think the stock market bull run is going to keep going and propel the stock market even higher? And are you convinced the Fed can get inflation back under control? If your answer to either or both of these questions is “no,” then now is the time to be proactive: take chips off the table and protect your wealth.

In his over 15 years in the financial industry, Fred has focused on commodities and precious metals as investment assets. He has penned several articles on topics such as the commodities markets and investing in precious metals for retirement accounts. Fred has helped thousands of clients safe-guard their investments with gold and other precious metals. He has been with Gold Alliance for over three years as a leading Sr. Portfolio Manager.
← The Stock Market: Is It a Bull Market or a Bunch of Bull? The Truth About Physical Gold as an Investment →