Are You Ready for the Debt and Asset Bubbles to Pop? 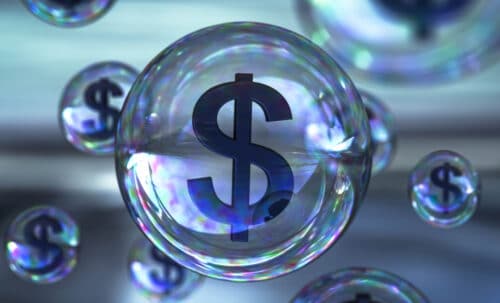 Why is it that the Federal Reserve is completely denying that there are asset bubbles about to burst all around us? The simple answer is that they don’t want the collateral damage that would ensue if people started pulling their investments from the markets.

The denial keeps a false sense of security in investors’ minds, but it doesn’t help their retirement portfolios because, inevitably, one or more bubbles will pop.

So, why is the Fed trying to keep people ignorant?

Our economy is becoming more and more unstable. The Fed is printing money like it has no connection to the rest of the economy, but they know that the purchasing power of the dollar is dangling helplessly on a thin string that is ready to snap.

What can you, the investor who just wants to make sure they have a secure retirement plan, do about what’s happening to our economy? The first thing that you should do is learn what these asset and debt bubbles are doing, then hedge your portfolio against them.

What is an asset bubble?

An asset bubble occurs when the price of assets (like stocks, real estate, or commodities) rises quickly without adding value to support the price increase.

Everyone remembers the housing bubble of 2008. Interest rates were low, and access to financing was so easy that people were able to obtain mortgages without any regard for their ability to repay. Demand for homes increased significantly, and housing prices kept rising, rising, rising…

But the prices weren’t rising because the cost of building materials went up. They were rising because people were buying homes at outlandish prices. Subprime loans offered low-income buyers to purchase homes well outside of their pay range. When those borrowers defaulted on their loans, the bubble burst and took Wall Street down with it.

And bubbles like this don’t just occur in the real estate world. Every asset class is susceptible to bubbles.

So, which asset bubbles should you pay attention to today? The housing bubble and stock market bubble are the two you should really keep your eye on.

Is another housing bubble going to pop?

We all remember what happened to the economy when the housing bubble burst in 2008. Will it happen again?

There was speculation on a new housing bubble in 2020, and now we’re seeing smaller housing bubbles pop up in cities and suburbs around the country. These bubbles are forming for a number of different reasons. For instance, Covid-19 slowed new constructions, and wildfires have brought the price of lumber to obscene highs.

The demand for housing is another factor. With more companies hiring remote workers and giving work-from-home options to their employees, people realize that they don’t have to live as close to the office. All of these things are leading to bidding wars in suburban areas as well as in cities. Couple this with extremely low-interest rates, and it’s no wonder that people are purchasing more than they can afford again.

These smaller real estate bubbles might not crash the entire economy like in 2008, but when they burst, they will still affect regional markets, not to mention the homeowners themselves. There’s also the risk that these smaller bubbles are trends that will spread to a larger part of the country, thus inflating a larger bubble.

And with the stock market being as fragile as it currently is, even small housing bubbles bursting could spell trouble for investors who aren’t diversified outside of the stock market.

When will the stock market bubble burst?

The stock market is currently full of false hope and an unsupported sense of security. It’s currently at an all-time high, and it shot up rather quickly over the last few months.

If we look at the total value of the market versus GDP, as the Buffett Indicator does, you will see that the stock market has become a massive bubble. 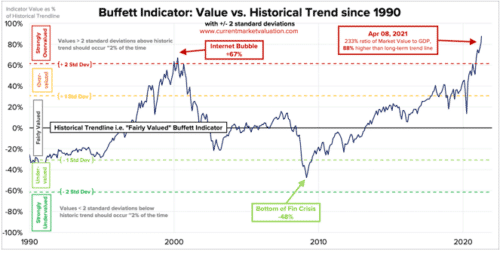 Consider that the last time the stock market was in a bubble even close to this was the Tech Bubble at the turn of the century. Back then, the ratio was at about 67% over the historical trendline (when stocks are considered “fairly valued”), and now we’re surpassing that with a market that is 88% over the trendline, which should give investors major cause for concern.

Why is the stock market so overvalued?

Large corporations have easy access to capital, including debt. With interest rates as low as they are, there is no way to cover that borrowed money. These corporations are using this easy access to debt for stock buybacks, which, in turn, is driving up the price of their stocks, but the increasing stock prices don’t reflect an actual increase in value because the companies aren’t using the money to expand production. This means the added “value” isn’t adding to GDP. Instead, the added capital and low rates are inflating a colossal bubble that can burst at any moment.

Even if we have the ability to somehow deflate the housing bubbles and the stock market bubble, we’re still facing debt bubbles.

What is a debt bubble?

Debt bubbles occur when there is an excessive amount of debt that cannot be sustained — meaning that it can’t be paid off.

Debt bubbles are dangerous to the economy because when they pop, it means that large corporations or massive amounts of people are defaulting on their debt, sending ripple effects across the entire economy.

We don’t often hear about debt bubbles because there are usually restrictions in place that should stop borrowers from borrowing more money than they can payback. However, many corporations and people are borrowing money that they believe they’ll be able to pay back.

You might be asking how this is possible, but the student loan debt crisis has taught us that unregulated borrowing can lead to a huge bubble. Another factor is access to cheap debt, which is prevalent with today’s low-interest rates.

Here are a couple of debt bubbles that you need to know about.

Yes. It already has burst, but not how you might think. We’re in a situation where job markets don’t have enough jobs to supply the demand of young professionals. When this happens, people are left with degrees they cannot use, but they’re stuck paying for those degrees.

The inability for borrowers to pay off their debt and then use their income to make large purchases, like homes and vehicles, has left a burden on the economy for over a decade. The student loan debt bubble started to swell to massive proportions in the early 2000s. Teenagers were taking out student loans that they couldn’t pay back, with the promise that their education would one day pay for itself.

You can say that borrowers shouldn’t have taken out those loans until you’re blue in the face, but the fact is those loans already exist, and millions of borrowers are unable to make minimum payments.

That is going to affect you and your financial future. We have millions of adults unable to make purchases, pay medical bills, or invest in the stock market or other assets, so the student loan debt crisis is affecting the health of every other market out there.

The proposed solution from the government is to forgive student loan debt for borrowers. There are still discussions on how much the government should forgive. While many are standing strong at $10,000 per borrower, there are several who are pushing for up to $50,000 per borrower, and there’s even a small group of lawmakers who are campaigning hard for full student loan debt forgiveness.

But even if we do something about student debt, we have another problem to solve.

No matter how you slice it, any student loan forgiveness program is going to cost the government a whole lot of money (anywhere from $300 billion to $1.6 trillion). This will most likely lead to the Fed printing more money, and we all know that when the Fed prints more money, the purchasing power of the dollar falls and inflation rises.

Are government and corporate debt bubbles going to burst?

There is no telling when government and corporate debt bubbles are going to burst, but they cannot sustain themselves much longer, and there isn’t a good way to deflate them.

With corporations using that debt for stock buybacks (as discussed above), a lot of the debt isn’t doing much to help the economy. It’s actually making it worse because it’s causing a stock market bubble.

Take a look at this chart that shows the corporate debt-to-GDP ratio. The spike in corporate debt started in March of 2020, in the beginning, months of the pandemic. While it did drop slightly, it’s still at a staggering high.

Add that corporate debt to the government debt that has been piling up for decades.

Take a look at this chart, which shows that government debt is currently nearing 130% of GDP. 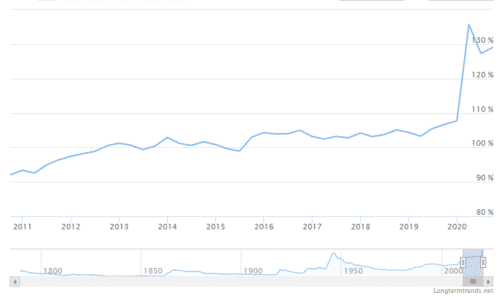 The stock market is booming. The Fed keeps its printing presses hot and ready to go for every stimulus bill that comes along, and the government keeps adding to the deficit. We’re in the roaring twenties, and it’s probably not going to last long.

All of the bubbles that are currently inflating — some of them about to burst — are making all of the other bubbles that much more fragile.

With all of the debt and asset bubbles we’re seeing right now, is there any asset that doesn’t have a bubble?

What can you do to protect yourself from the bursting bubbles?

The trick is to find the asset classes that haven’t reached all-time highs after the pandemic and haven’t formed bubbles. The most prominent asset class that has lots of room to grow is precious metals.

Investing in precious metals like gold and silver is one of the best ways to hedge against the bursting of bubbles that touch nearly every dollar that’s ever passed through your hands (or your bank account).

You need to protect your investments. Yes, keep a portion of your investments in other asset classes like stocks, bonds, and real estate, but give yourself an insurance policy. You can do so by investing part of your retirement savings in an asset outside of the paper asset markets.

Give us a call today to learn more about how you can invest in precious metals to help you protect your retirement.

← Is China Planning to Attack the Dollar With a Gold-Backed Yuan? The Bull Run Rainbow →