For decades, the US dollar has been the world’s reserve currency, so shouldn’t it be superior at storing wealth compared to all other currencies and assets? You would think so, but because of endless money printing by the Federal Reserve, our dollar’s purchasing power has been hollowed out, and this is most evident when you compare it to gold. Ninety years ago, one ounce of gold was worth $20, and just a few months ago, the precious metal crossed the $2,000/oz barrier. (Currently, on December 9, 2020, the gold spot price is $1,836.)

In other words, the dollar has lost 99% of its value against gold. Other important currencies have performed even worse—the Japanese yen, for instance, has lost 99.98% of its value compared to gold in one century. Why? You guessed it: massive money printing by the US and Japanese central banks over the past 100 years. 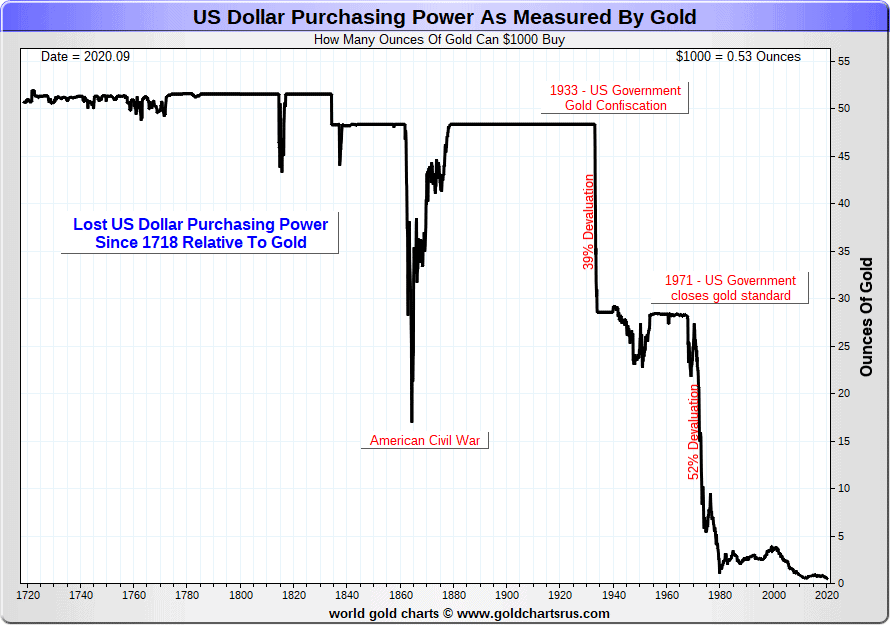 How does gold work as a store of wealth?

Gold detractors (haters gonna hate!) say that gold does not provide a yield, but that ignores the fact that gold is money (JP Morgan, among others, have said). And money does not yield. It’s not supposed to. All “good” money needs to preserve and store value during times of inflation, deflation, and all other economic circumstances. And gold does that with a 5,000-year track record of success.

Imagine that you have a box of purchasing power. In this box, you keep assets that will help you to purchase goods and services when you need them. Need to buy a car? Go to the box, take an asset from the box, turn it into cash, and use it. Need to support yourself through retirement? Go to the box…you get the picture. The question now is simple: What assets are you going to put inside your box? Place US dollars inside, come back in 20 years, and your box is worth around 30% less or worse. Place stocks or bonds, and you’ll never know since you are depending on the fluctuations of the market.

However, if you place gold inside your box, then 5,000 years of history will show you that you can have the peace of mind that when you come back to the box years later, you will be able to buy at least the same goods and services as the day you placed the gold inside the box, if not way more (more about how gold grows in value below).

And here is the kicker: What about placing in our boxes the assets we have been trained to think are true safe havens—US dollars with interest, or as they are more commonly known US government bonds? Well, gold has substantially outperformed US bonds since the abandonment of the gold standard in 1971.

Gold has no third-party risk

Gold has one more feature that baffles investors—while they understand it, they don’t really understand how to quantify its rare value: Gold is the only financial asset that’s accepted globally without counterparty risk. This means that when you buy gold, you don’t depend on the performance of anyone for your gold to preserve value. You face no risk from the actions and intentions of anyone. When you buy shares in a company, you need the company to perform, you need its CEO to guide it well, and you need to be lucky enough not to have a competitor take your company’s market share. When you have US dollars, you rely on the good faith of our government with over $26 trillion in debt.

There is no such risk with gold. How do you value that? Well, here’s a clue: Even after we abandoned the gold standard in 1971 and positioned the US dollar as a separate currency not dependent on gold, gold remained the most sought-after safe-haven asset exactly because it had no counterparty risk. Across the world, the precious metal stayed in the vaults of central banks even when its price set new records. The reason can be found in a law of economics called Gresham’s law, which states that “bad money drives out good money”: When the price of gold increases, central banks choose to hoard gold (good money) while spending currency that decreases in value (bad money).

Gold compensates for inflation as it preserves purchasing power—but not only does it conserve purchasing power, it tends to even increase it. There are different opinions as to why this happens. Some say that this tendency of gold shows that the government’s inflation numbers are too low. The hidden inflation is reflected in the price of gold rising beyond what would have been expected. Another theory says that since technological advancements lower the cost of production and thus the price of goods, we should see an increase in the purchasing power of sound money, such as gold. This theory sits well with our history before the establishment of the Federal Reserve. When the US was on a pure gold standard, Americans saw their wealth grow constantly. Think about it for a second. You have money in savings, and it allows you to buy more goods and services every year. This was our situation for over a hundred years before the “invention” of the Federal Reserve.

Central banks are telling us what they will do

The soaring debt levels we see globally are unsustainable. The only way they can be lowered is through inflation or via renegotiating or reducing the debt. Since debt reduction hurts the wealthy, central banks are opting for inflation—including our very own Federal Reserve. They are following their words with action, printing more money than ever before in a race to debase their currencies and allow them to ease the debt burden by wiping out their value.

This is not a new invention—it’s been done before. After World War II, the Fed used the same strategy to eliminate the war debt, but the consequences to retirement savers were devastating. This approach to debt reduction via inflation that will hurt savings is not reserved to our Federal Reserve. A few months ago, the European Central Bank president, Lagarde, said: “We should be happier to have a job than to have our savings protected.”

Pay attention to the fact that, while saying that, central banks are protecting their balance sheets by hoarding gold at a pace not seen in over 50 years. So if you don’t want to sacrifice your savings and come back to your purchasing-power box to find pieces of paper with little value, you may want to consider gold as an investment. After all, it’s what central banks are doing to protect themselves.