Deutsche Bank: The Economy Is Sitting on a Time Bomb 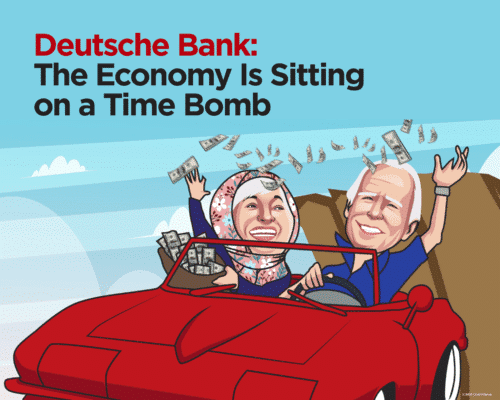 Inflation is “transitory,” says the Federal Reserve, even after the inflation rate reported in April was the highest in 13 years at 4.2%. And even now, the central bank insists that price pressures will fade soon despite inflation surging even higher to 5% in May. Core inflation (which excludes food and energy costs) is now the highest in 29 years. 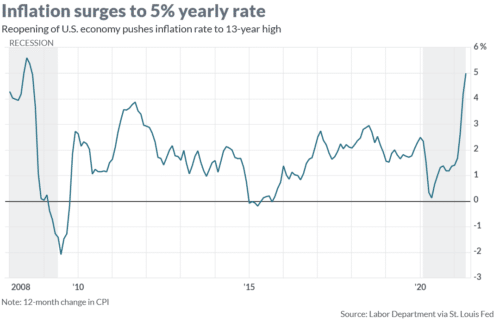 But in a report released this week, Deutsche Bank warns that viewing US inflation as temporary could have devastating consequences for the US economy.

According to Deutsche Bank, the eighth-largest bank in the world, focusing on stimulus while dismissing inflation fears will prove to be a mistake — if not in the near term, then in 2023 and beyond. The bank points its finger at the Fed’s new framework where the central bank will tolerate higher inflation to achieve a full economic recovery. The Fed intends to maintain loose monetary policies until inflation shows a sustained rise, but this financial engineering, says Deutsche, will have dire impacts.

“The consequence of delay will be greater disruption of economic and financial activity than would otherwise be the case when the Fed does finally act,” writes Deutsche. “In turn, this could create a significant recession and set off a chain of financial distress around the world, particularly in emerging markets.”

Fiscal injections are “off the charts”

According to the bank, we are witnessing the most important shift in global macro policy since the Reagan/Volcker axis in the early 1980s: “Fiscal injections are now ‘off the charts’ […]. Never before have we seen such coordinated expansionary fiscal and monetary policy. This will continue as output moves above potential. This is why this time is different for inflation. The effects could be devastating, particularly for the most vulnerable in society.”

The global economic environment has been characterized by low inflation for a few decades, but inflation is now on the rise globally, accelerated by the historic monetary response to the pandemic. In the US, for instance, Congress has passed more than $5 trillion in pandemic-related stimulus so far, and the Fed has nearly doubled its balance sheet to almost $8 trillion.

Global economies are sitting on a time bomb

Deutsche Bank calls it “admirable” that the Fed’s priorities are shifting towards social goals, but “neglecting inflation leaves global economies sitting on a time bomb. Sovereign debt has risen to levels unimaginable a decade ago with large industrial countries exceeding red-line levels of 100% of GDP.”

In fact, US sovereign debt (federal debt) has hovered around the 100%-of-GDP mark for years before surging dramatically when the pandemic hit America last year (see chart below).

The response to the crisis caused by the pandemic dwarfs the response to the crises in 2008 and the 1930s. The closest comparison is the stimulus seen around WWII, where US deficits remained between 15–30% for four years. There are, of course, many significant differences between the pandemic and WWII, notes Deutsche Bank, but it points out that “annual inflation was 8.4%, 14.6%, and 7.7% in 1946, 1947, and 1948 after the economy normalised and pent-up demand was released, [which is why] this time is different for inflation.”

The type of inflation that is coming could be similar to what we experienced in the 1970s, says the bank. That decade saw inflation average 7% with spikes into the double-digits. To try to squash inflation, then Fed Chairman Paul Volcker increased interest rates dramatically, which pushed the US into a recession. This could be what’s in store for the US this time around as well, warns Deutsche Bank:

“Already, many sources of rising prices are filtering through into the US economy. Even if they are transitory on paper, they may feed into expectations just as they did in the 1970s. The risk then is that even if they are only embedded for a few months, they may be difficult to contain, especially with stimulus so high.”

Adding to the trillions spent on stimulus packages, the Biden administration is pushing further spending bills. And, says US Treasury Secretary Janet Yellen, Biden’s $4 trillion spending plan should go ahead even if it triggers higher inflation that could last into next year and leads to higher interest rates.

“If we ended up with a slightly higher interest rate environment, it would actually be a plus for society’s point of view and the Fed’s point of view,” Yellen told Bloomberg on Sunday. That is the same Yellen, who in 2017 said she didn’t expect another financial crisis in “our lifetime.”

Deutsche Bank’s warnings may not line up with the general view on Wall Street, but the bank shouldn’t be ignored. Should inflation keep rising or even sustain current levels for the long term, it could have dire consequences not only for the economy but also for your retirement savings: As inflation dilutes the value and the purchasing power of the dollar, it also dilutes the value of savings that are sitting in cash and in dollar-denominated assets, such as stocks.

If we are entering an era similar to the 1970s, then look at gold and silver, which, during that decade, surged over 1,800% and over 1,400%, offsetting for investors in precious metals the losses inflation caused to the dollar-denominated assets they were holding.

If you haven’t already protected your hard-earned money, now is the time before inflation takes a strong hold of the economy and your retirement.