Egyptian Billionaire Sawiris: Allocate This Much to Gold 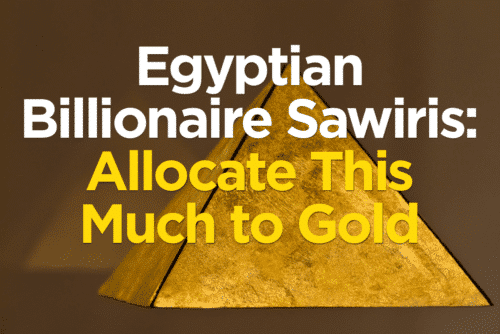 Another month, another report on inflation. The latest Core CPI inflation rate for the US remains high with prices growing at a pace of 4.3% for the year ending in July. This number does not include grocery and energy costs, which skyrocketed. “Core CPI” is a calculation the Federal Reserve uses so it can limit its interest payments on our government’s debt and have the government pay less to fixed-income recipients. This means you and I are seeing much higher “real inflation,” most likely at around 8% to 9%.

The real inflation numbers are no small matter, and US consumers and businesses are feeling the pain and are increasingly concerned about inflation. There is only one historically proven way to deal with inflation, and that is investing a portion of your wealth in physical gold, which not only protects but also grows your hard-earned money during times of inflation.

But when you diversify with gold, how much of your IRA/401k should you allocate to the precious metal? Up to 30%, according to Egyptian billionaire Naguib Onsi Sawiris, who explains that gold is the investment to own when the world is concerned about rising prices.

“The world is worried about inflation. This is a cycle we have seen before,” Sawiris told CNBC. Sawiris is the chairman and CEO of Orascom Investment Holding and ranks as the second-richest person in Egypt.

The billionaire made headlines across the world when he invested billions in gold in 2018. In his interview with CNBC, he explained that “you need to have part of a portfolio invested in gold. I say 20% to 30%. It is something that is fundamental. It’s always been there.”

Gold as a safeguard against inflation and stock market crashes

A successful and experienced investor like Sawiris calls gold “fundamental” because anyone needs a hedge against crisis — and a financial crisis of one type or another always comes. Gold has a proven track record for hedging against financial crises, such as the stock market crash in 2008, as well as hedging against inflation, such as the one we saw during the stagflation of the 1970s.

“I am a long-term investor. Let’s say inflation comes in, and there is a crash in the stock market. You’ll be very happy that you have a position in gold. The stock market has been at the highest range for a very long time now. At some point, [the crash] should happen. There are also a lot of political instabilities in the world. They could blow up. Corona is still a never-ending saga. There is a lot of uncertainty,” Sawiris explained. “I want to go to sleep at night and not be affected by the stock market or the pandemic.”

Goldman Sachs shares Sawiris’ view that the world is facing many uncertainties, which is why the financial behemoth is forecasting that gold could climb as high as $2,500. At the time of writing, the spot price of gold is $1,783 per ounce. Diego Parrilla, fund manager of Quadriga Igneo, goes even further by predicting that the precious metal will climb to $3,000 or even $5,000 within three to five years. Parrilla has made bold predictions before: Last year, he said gold would rise above the $2,000 mark over the summer. Not long after, gold set a new all-time high at $2,067.

What these numbers should be telling you is not to invest in gold if you’re seeking short-term gains. The focus should not even be on what is the right entry point for gold. The point is that these analysts are telling you indirectly that a major crisis is coming. Gold will not climb to $3,000 or more without a major stock market collapse or high inflation. If either of those happens, the growth of your 20–30% in gold happening because of the flight of other investors to safety will save you when your 70–80% in stocks and bonds collapse.

If you’re not positioned in gold, you will see your 100% paper asset portfolio crumble since you have no real hedge. This happened to investors both in the 2000 dot-com bubble and the 2008 financial crisis.

← Gold, the Dollar, and Where Our Faith Is Leading Us — Part 2 What Economic Recovery? →