Gold has been a highly valued asset ever since it was first discovered and used as currency thousands of years ago, but when was the gold price highest ever? And what about its highest value ever in terms of purchasing power?

When was the gold price highest ever in ancient history?

The story of gold as a currency throughout history is a story of its debasement. In 30 BC, Emperor Augustus set the first price of gold at 40 coins per pound (“pound” being the actual weight of gold). This meant that if you wanted to trade one solid pound of gold, you would receive 40 coins. Almost 200 years later, Emperor Marcus Aurelius debased the currency to a value of 50 coins per pound of gold.

Roughly 50 years later, around 250 AD, it was debased even further to around 70 coins per pound. This accelerating debasement meant that the value of the currency dropped so much that Rome’s economy entered a state of extreme hyperinflation. Prices soared over 1000% across the ancient empire, and the Roman government attempted to sustain the empire with massive taxes to compensate. Many historians believe this economic collapse was actually one of the most significant factors leading to the fall of Rome.

What the gold price highest ever?

It’s widely believed that gold hit its highest price ever due to the economic and political uncertainty that occurred as a result of the global COVID-19 pandemic. This unprecedented turmoil pushed fearful investors toward the safe-haven precious metal. Since then, the price of gold has hovered around the $1,800 mark, but many analysts are predicting that we’ll see a new gold price record in 2022.

What factors set up gold price to reach its record highest leading up to 2020?

The gold price set a new high in August 2011 at $1,825 as investors looked for a way to hedge against the market turmoil following the Great Financial Crisis of 2008, which swept across the globe. The burst of the housing bubble drove the world into a deep crisis that would linger for years, and when the US entered a debt-ceiling crisis and both Moody’s and S&P downgraded the outlook on US finances, investors flocked to gold.

In early August 2011, S&P issued the first-ever downgrade of the federal government’s credit rating, and as a result stock prices plummeted, and the price of gold reach its highest price at hat time.

Whether you look at the nominal gold price or its price adjusted for inflation, there is one clear conclusion you can make: The price of gold has been on an upward trajectory, especially since Nixon took the US off the Gold Standard.

The chart below shows the nominal price of gold over the last 100 years. 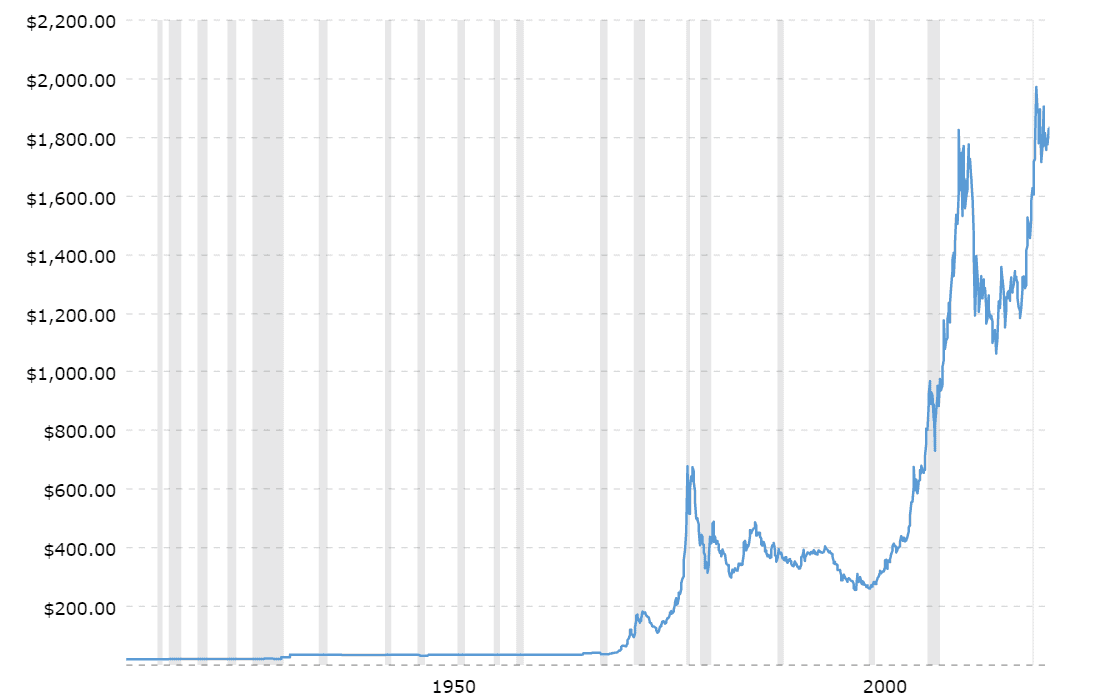 And this chart shows the value of gold when adjusted for inflation. 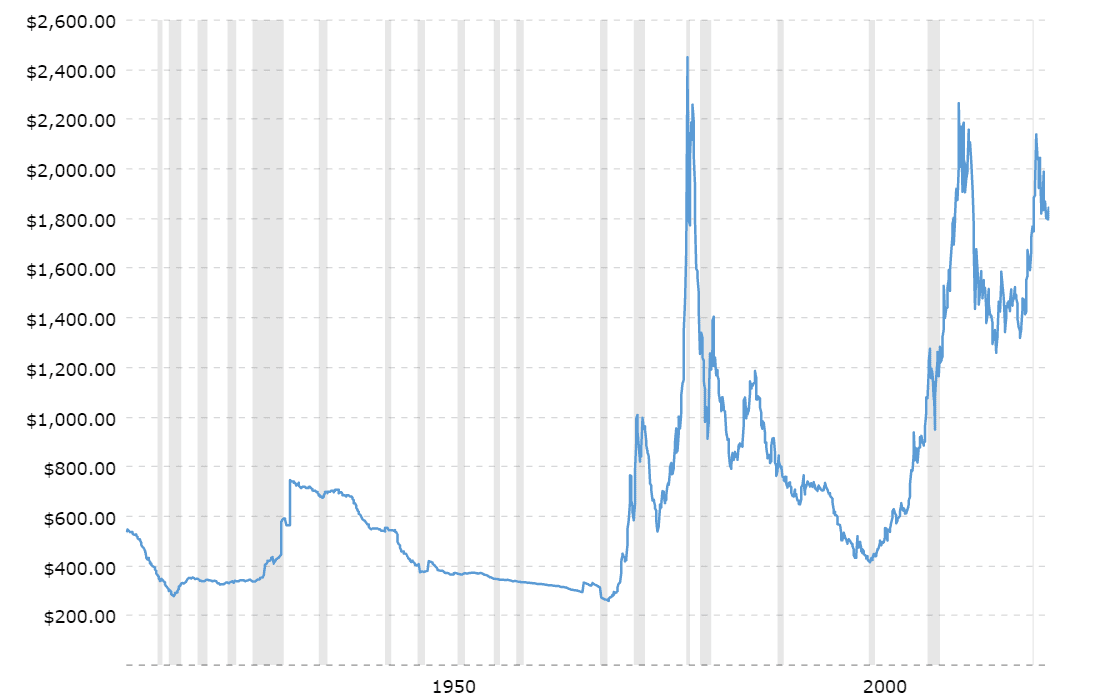 What caused gold prices to spike in the 1970s?

Gold’s value skyrocketed in the 1970s after the United States ditched the Gold Standard and switched to the unbacked by gold US dollar as “fiat” money.

In 1970, the price of gold was $38.90 an ounce, but as soon as we left the Gold Standard, people turned to gold in anticipation of the possibility of an inflation crisis, and that proved to be a wise decision. By the end of 1974, the price of gold hit $183.77 an ounce, showing over 450% growth in just four years.

With its skyrocketing value, a lot of investors had their eyes on gold by the end of the decade, and it would soon reach another high.

Inflation, lack of economic growth, and soaring unemployment created the perfect storm of economic disaster, and many investors sought out gold as a hedge against the stagflation, causing its price to skyrocket. The history shows us that gold shines especially bright during times of severe crisis, which cause its price to break new records. And this is a great tool in a portfolio — having an asset that grows when others don’t.

How to Spot Hidden Asset Inflation and Reduce Risk