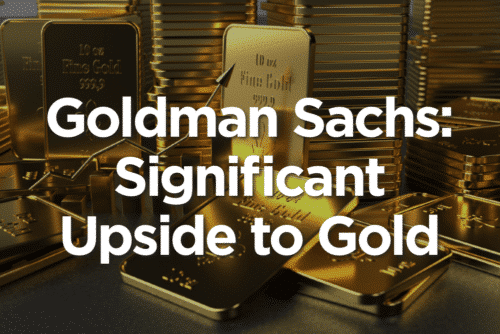 For the past month, the spot price of gold has hovered around the $1,800/oz mark. But that’s about to change, says Goldman Sachs, who sees significant upside to gold if inflation surges higher than expected or if the global economic recovery slows down.

“In a scenario where the global economic recovery does not play out as expected or inflation begins to move materially above expectations, we see material upside to gold given its undervaluation and low allocation from the investment community,” Goldman said earlier this month.

According to the bank, gold is undervalued and could hit $2,500 — an increase of over 27% from the current price ($1,804 at the time of writing). That makes gold a “good strategic purchase,” says Goldman. The potential upside in the precious metal becomes even more likely should the Fed under-react to rising inflation and a slowing global economy; this, says Goldman, would drive investors towards defensive assets such as gold.

Even if the economic recovery stays on track, and if the US inflation rate remains moderate, gold would move higher to $2,000, an increase of almost 10% from today’s spot price.

“Ultimately, a number of uncertainties are still hanging over the global economy. Therefore, gold may be a good strategic purchase for portfolio managers looking to hedge against tail risks of macro volatility,” Goldman concluded.

So, how is the global economy doing?

According to Reuters, economic data from the US and China, which make up more than 50% of world economic growth, is signaling rising inflation and a slowdown in the global economic recovery. This coincides with the resurgence in the delta variant of the coronavirus, which is rapidly spreading in regions around the world, fueling renewed concerns of mandated lockdowns.

And according to George Saravelos, Chief FX Strategist at Deutsche Bank, markets may be sending alarm signals:

“As prices have risen, the consumer has been cutting back demand rather than bringing forward consumption. This […] shows the global economy has a very low speed limit.”

Bank of America Merill Lynch shares the sentiment, seeing “stagflation” concerns for the second half of 2021 because of slowing inflows into stocks in addition to outflows from high-yield assets. (Stagflation is a period characterized by inflation combined with slow or negative economic growth.)

And investors seem to be picking up on this development. According to the American Association of Individual Investors, investor sentiment is at its most bearish in months: And while we advocate for a position in gold as a crisis and inflation hedge regardless of the conditions, it looks like now would be a very lucrative short-term entry point into gold investing or a great time to increase your position with gold as the economy is slowing down and the Fed is still not acknowledging or reacting to the rising inflation. This is a recipe that may very well lead us to see gold go above $2,000 towards Goldman Sachs’ $2,500 mark. Kevin Troy In his more than 17 years in the financial industry, Kevin has focused on precious metals as investment assets. He has penned numerous articles on buying and selling precious metals and about the best entry and exit strategies for the financial markets. Thousands of clients have benefited from Kevin’s expertise and learned to protect, preserve, and safeguard their investments with precious metals. Kevin has been with Gold Alliance for more than 3 years as a leading Sr. Portfolio Manager, and he oversees a large portion of our clients’ portfolios.
← The Wage-Price Inflation Spiral Gold, the Dollar, and Where Our Faith Is Leading Us — Part 1 →