by Darwin HostelleyMay 26, 2021Market Insights, The US Dollar The US dollar has been the world’s reserve currency for nearly 80 years. However, the purchasing power of the dollar has been falling steadily since we left the gold standard in the 1970s. In the last two decades, with the Fed’s massive money printing and the government’s debt and deficits, it’s no wonder that countries around the world are losing faith in the strength of the dollar.

So, what would happen if the dollar would lose its status as the world reserve currency? What are the actual benefits you and I get by our currency being the reserve currency of choice across the globe?

What is a reserve currency?

A reserve currency is a national currency that is widely held globally because it’s expected to hold its value, and the market for every item or service denominated in that currency is extremely large and liquid. Before the dollar, other currencies have been the preferred reserve currency, but they were eventually replaced by another currency. This history shows us that no currency can keep the reserve status forever. So, the question is not whether or not the dollar will lose its reserve currency status but how close we are to that moment. 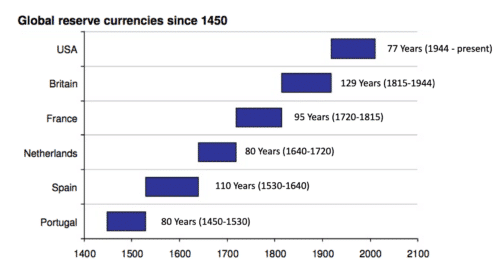 What are the benefits of the dollar being the world reserve currency?

To the world of commerce, the main benefit  of having a world reserve currency is to keep international transactions running smoothly. When everyone works with the same currency, trade becomes easier. This is especially important for trading with countries whose currency isn’t used outside of their borders or whose currencies are volatile and fluctuate significantly — these countries rely on the dollar to trade since their trade partners are unlikely to accept their risky currency as payment.

Since the US is issuing the currently used reserve currency, our transaction costs are reduced. We don’t have to exchange our dollar for another currency to trade — that burden, and the exchange cost, lies on our trading partners. We are also not exposed to the same level of exchange rate risk, especially when it comes to commodities, which are often quoted and settled in dollars.

When more companies and individuals are using the dollar, it means more transactions are denominated in dollars. This boosts the dollar’s liquidity: financial assets can be priced more easily, and loans are more easily provided. In short, US companies get easier access to capital because of the dollar’s reserve status. Those companies can employ you or a family member, for example, so the dollar’s status is a benefit to you as well.

Another privilege of the dollar being the world reserve currency is the fact that it becomes easier for the United States to export its debt. Being a world reserve currency puts the dollar in higher demand because of the trust in the dollar. This makes dollar-backed securities (e.g., US Treasury bonds) more attractive. Countries tend to buy these dollar-backed bonds to increase the credibility of their own money supplies. The sales of these bonds fund our needs and lifestyle.

When will the dollar lose its status as the world reserve currency?

Experts are torn on this issue. While some believe that the dollar is strong, others have watched the fall of the purchasing power of the dollar and are skeptical towards our greenback.

Currently, the dollar is used in 40% of global trade transactions. When it comes to global cross-border transactions, the dollar dominates, being used around 80% of the time. But this may soon be changing as the confidence in the dollar globally is starting to fade. The purchasing power of the dollar has been falling at an alarming rate. Take a look at this chart, which shows what happened to the US dollar over the last 100+ years.

As the purchasing power of the dollar falls, more and more countries may find it’s in their best interest to use more stable currencies for their transactions, dethroning the dollar as the world reserve currency. And we’re already seeing this — the dollar’s share of global official reserves is the lowest in over 25 years.

The major problem with the dollar being the preferred reserve currency in the world is that we have been spending beyond our means. We’ve taken to bailing out banks and big businesses when crises hit them. We’ve also sent billions in support to our citizens during the pandemic. To do all this, we’re increasing our money supply, and, along with it, comes inflation. We believe in the strength of the dollar and take it for granted that other countries will keep believing in the dollar as well. Thus, we’re not worried about debasing the dollar through money printing.

How could your standard of living change if the dollar loses its world reserve currency status?

Through the reserve currency privilege, we in effect let the world share our debt and finance our needs. This cannot last forever. The continuous weakening of the dollar could lead to a significant decrease in demand for the dollar and dollar-backed securities. That means that the United States won’t be able to sell off its debts to foreign countries.

A weakening dollar in itself makes foreign goods and services more expensive for American consumers and businesses, and should the dollar lose the reserve currency status, it would make our transactions more expensive as well — costs that businesses would pass on to US consumers.

Here is a situation where our current rising inflation could explode higher just because we will be forced to trade with other currencies to get the goods we want and need. Interest rates for American consumers and businesses would likely also increase, making everything from buying a house to building a factory more expensive, which equals more inflation. Let’s not forget our corporations’ easy access to debt, which will be more difficult and more expensive if the dollar is not Numero Uno.

In recent months, inflation has become an increasing concern. Without the global demand for the dollar and with countries offloading dollars, inflation is likely to rise even further. This should concern everyone, especially those of us who have retirement savings. Your hard-earned money could lose a significant portion of its value if the US dollar loses its spot as the world reserve currency.

In short, for us Americans, our standard of living could decrease dramatically.

It’s time to protect your wealth.

How can you protect your financial future and hedge it from the dollar?

We all live, buy, sell, manufacture, and consume in dollars. Hedging against the dollar, especially with its downward trajectory, is important, so you need to act now. A small portion of your portfolio in gold and silver gives you peace of mind that, no matter what happens to the dollar, your financial future is protected. As you can see, while the dollar is the world reserve currency, gold’s upward trajectory over the last 50 years is the exact mirror image of the dollar’s, proving gold’s ultimate purpose as a store of wealth that preserves and grows your wealth through the decades. The lower the dollar goes, the more dollars are required to buy the same amount of gold, and the higher gold goes, offsetting the dollar’s demise.

If you haven’t already rolled a portion of your IRA into physical gold, are you going to wait until the dollar and the value of your IRA decline even further?

Darwin has over 30 years of experience in the investment and risk financing sectors, focused on precious metals as investment assets. As an avid writer, Darwin has published multiple articles about investing in gold and silver, with a focus on their ability to protect and grow his clients’ investment portfolios. As a leading Sr. Portfolio Manager with Gold Alliance, Darwin oversees many of our clients’ portfolios.