Every time US unemployment hits a low, the cycle resets, and a recession or crisis is set off. This is where we are at now. As we can see in the unemployment chart below, the boom cycle is over: the US unemployment rate is at a low, meaning it’s likely that a market crash is coming in 2019. 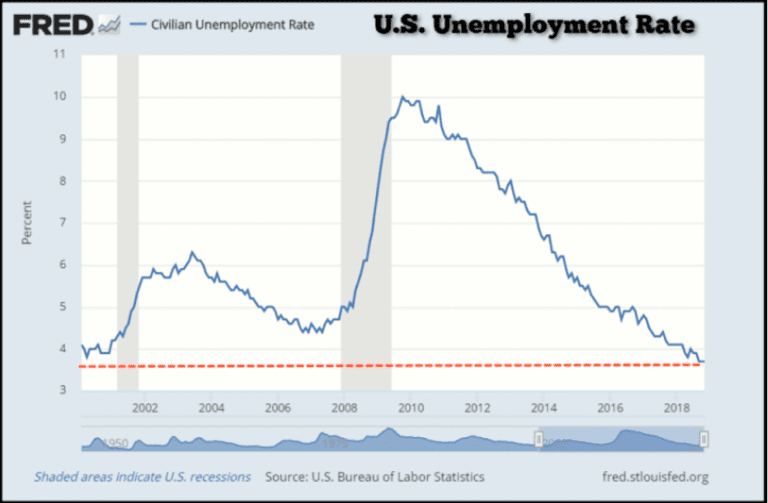 Once the stock markets start to roll over, and we see increasingly negative economic indicators such as falling home and auto sales, the bust cycle is well on its way. 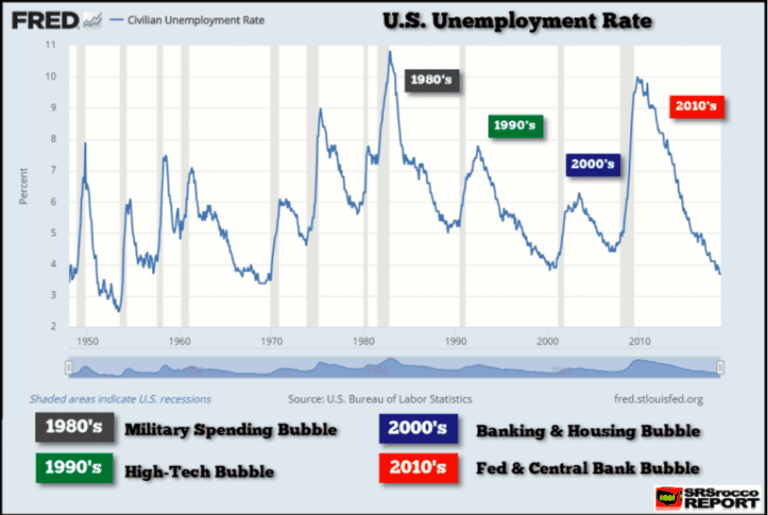 In the decades after World War 2, the US witnessed a suburban boom and an expanding manufacturing economy. However, our economy got into trouble when US oil production peaked in 1970, and when Nixon abandoned the gold standard in 1971. The result was substantial consumer price inflation, and the higher costs pushed manufacturers to go overseas.

With jobs fleeing the US, the government introduced measures to expand the US economy. The 1980s saw massive military spending, although there were no wars or significant military conflicts. Unemployment dropped from 11% to 5% in the late 1980s.

Things changed quickly, though, and the early 1990s was plagued by the next recession and skyrocketing unemployment. It would take almost another decade before the US economy flourished again. During the Tech Bubble, unemployment fell to 4%.

Of course, this boom cycle came to an end with the collapse of the Nasdaq in the early 2000s. The Federal Reserve was quick to act, and it did so by leading us into the next bubble, the Banking and Housing Bubble. The Fed lowered interest rates so more Americans could afford housing, and Wall Street came up with the now infamous mortgage-backed securities, opening the doors for people to houses they would otherwise not qualify for.

In 2008, the markets imploded with the collapse of Lehman Brothers, Bear Stearns, and the entire US housing market. A recession spread across the globe, and the entire financial system was in panic, until the Federal Reserve and other central banks stepped in.

In just the past ten years, the top central banks have purchased over $11 trillion in assets—and this does not include the tens of trillions of additional public, corporate, and private debt. Now, the important question is: Who is going to bail out the central banks?

The 2019 unemployment rate is at 3.7%, a five-decade low. It’s time to get ready for the rollercoaster ride of your lifetime. 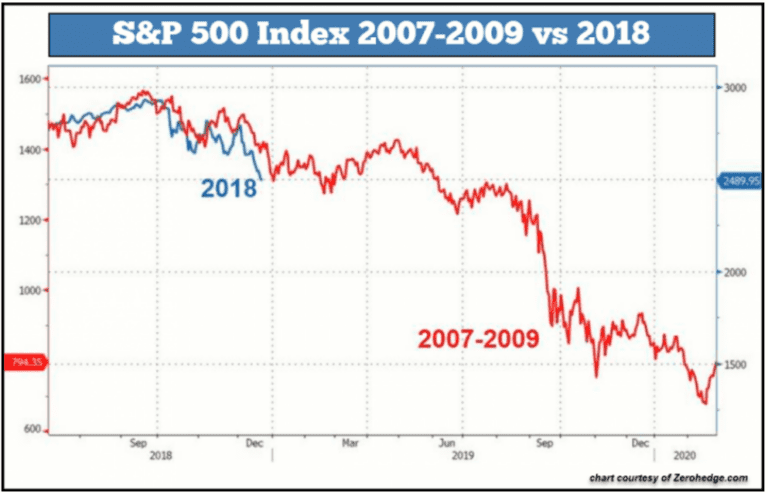 This chart shows the S&P 500 from 2007 to 2009 (red) compared to the same index in 2018 (blue). It’s clear that there are some similarities between the past and the present S&P 500 correction. If the next two years unfold how The Great Recession did, the Dow Jones will reach somewhere below 13,000 points.

Protect your savings from a market meltdown by investing in a precious metals IRA with Gold Alliance.