For many Americans, the Fed is a mysterious collection of a dozen unknown bureaucrats — our version of an exclusive cabal — whose actions and decisions control the nation’s economy.

The Fed establishes interest rates, which affect the rates on loans, and manages the flow of money available to our government, businesses, and individuals. So, its decisions directly impact economic growth and the value of our currency.

The history and goals of the Fed

The Reserve System was initially established in 1913 with the stated goal of stabilizing the country’s banking system and ensuring access to money and credit in all parts of the country.

In 1977, Congress mandated that the Fed’s goals were maximum employment, stable prices, and moderate long-term interest rates. History shows that these goals are often incompatible, even contradictory.

The Fed can dictate the money supply in three ways:

Our government dictates the fiscal policy to affect overall demand for products and services. Fiscal policy involves determining taxation and government spending. Lowering taxes stimulates economic growth by leaving more money in the economy to encourage spending, while increased government spending increases employment. However, government spending and low taxation can trigger inflation, which punishes consumers, people on a fixed income, and companies in competitive industries (since they are less likely to pass higher costs to customers).

The effects of fiscal policies appear more quickly than the effects of monetary policies. Fiscal policy impacts people directly since it typically involves sending money to people the government deems should receive it. Monetary policy, on the other hand, has an indirect impact since it goes through the banks before reaching companies and individuals.

The track record of the Fed

If you asked the Fed about their achievements, they would point to the following effect they have on the strength of the dollar and our economy:

The dollar as the world’s reserve currency

While its share of foreign exchange reserves has declined more than 10% since 2000, the dollar remains dominant compared to all other currencies. 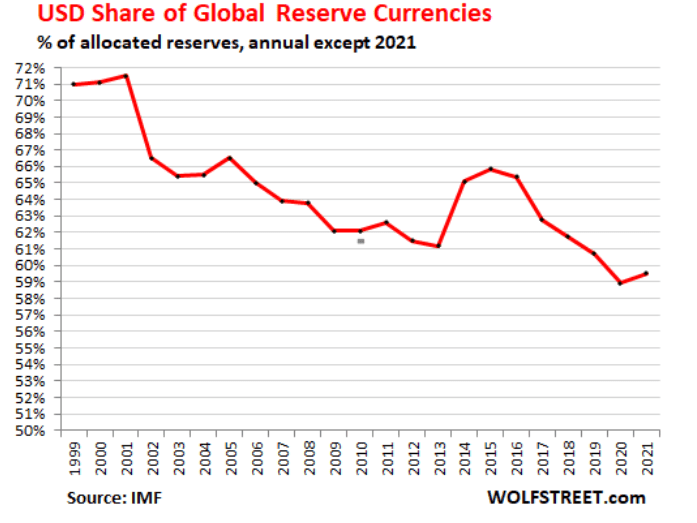 Since 1950, the unemployment rate has averaged about 5.7%, slightly above what many economists consider the natural rate of unemployment.

Over the last 90 years, real GDP growth has occurred more than 82% of the time.

The US inflation rate

Up until early 2021, inflation was low for several decades, which was a feather in the Fed’s cap. But all that changed, and in February 2022 the annual inflation rate was 7.8%, a rate last seen four decades ago. Economists worry that the high inflation rate is a sign of a new “Great Inflation,” like the period in the 1970s and early 1980s that witnessed the failure of the global monetary system, four economic recessions, two severe energy crises, and the implementation of wage and price controls.

The challenges of the Fed today

Investors are concerned whether the Fed will be able to effectively manage the challenges facing the economy due to the unprecedented events of recent years:

In 2011, the US national debt exceeded our GDP for the first time since World War II. The increase in debt was due to a combination of the stimulus provided to the markets through both fiscal and monetary policies after the 2008 financial crisis and the COVID-19 pandemic.

Economists worry that a continued expansion of US debt is unsustainable, a position confirmed by Fitch Ratings (an American credit rating agency) where a “further meaningful increase could lead to a downgrade [in credit ratings].” An inability to use monetary policy to finance government infrastructure programs and other needed programs could send the economy into a tailspin.

When there’s a threat of high inflation, the Fed historically handles it by slowing the economy through limiting the money supply and raising bank reserve requirements and discount rates. Pressures to restore economic growth to pre-COVID level limit the Fed’s appetite to exercise negative stimulus, which is required to curb inflation.

The growing politicization of the Fed

The Federal Reserve was established as an independent agency intended to be invulnerable to political pressures. Political hostilities have divided us and increasingly affect appointments to the Reserve Board and the Board’s actions.

In the past year, Congress has attempted to broaden the Fed’s mandate beyond monetary policy to include climate change, racial inequity, and other partisan political issues. In December 2021, Randal Quarles, the Fed’s departing vice-chairman for supervision, warned that there are those who question “why the Fed can’t fund repairs of the country’s aging infrastructure, or finance the building of a border wall, or purchase trillions of dollars of green energy bonds, or underwrite the colonization of Mars.” Quarles concluded that such efforts, if successful, would turn the Fed into “the most politically entangled organization in the country — and the damage to our core monetary policy and financial regulatory mission would be great.”

The conundrum of debt and interest rates

Slowing the economy to curb inflation by raising interest rates will increase the costs of servicing the national debt. By suppressing interest rates in the past, the Fed has enabled the government to borrow money at historically low rates (1.98% in 2021). A one-percent increase in the Federal borrowing cost would increase interest costs by over $300 billion, resulting in further government deficits (and growing debt) or a significant reduction of government services. The Fed is facing rising uncertainty

The challenges above are not the only ones the Fed will experience. Geopolitical tensions are on the rise — the Russian invasion of Ukraine is escalating and is already having an impact globally. Meanwhile, China is seeking to replace America as the global financial power. International trade depends on the successful operation and coordination of complex supply lines, communication systems, and financial transfer protocols. Income disparity between the haves and the have-nots, domestically and between nations.

The decisions of the Fed affect all these issues directly or indirectly, and the Fed simply cannot know all the factors it has to account for in its decision making.