Amidst stumbling stocks, rising COVID-19 cases, and growing fears of a second wave of infections, the Fed issued a cautious outlook earlier this week. And, no surprise, to counter the doom and gloom, Treasury Secretary Steve Mnuchin announced that another $1 trillion in stimulus will be injected into the economy.

But what he was really saying to market traders was that the funds will be pumped straight into the market. This time, however, the market didn’t listen and kept going down.

Pumping trillions into the economy means one thing: the dollar to which you trust your income and your savings is going to take a big hit. In other words, you and I will take the hit. It will be extra strong for Americans because our dollar is the world’s reserve currency, and several factors suggest that the dollar is at risk of losing this long-standing status.

As a reserve currency, our US dollar is a benchmark against which other currencies and commodities are valued. When a currency like ours is that dominant, it forces other currencies to conform rigorously to its standards. If a country ignores the dominance of the reserve currency and manipulates its own national currency, then that currency—and the people holding it—will suffer; the country’s currency will fall. Why? Because wealth flows to where it’s stronger and safer.

The problem is that the Fed has changed the rules since the Great Recession. With its record-low interest rates and excessive quantitative easing, our central bank has allowed for an immense expansion of debt and credit. The tools of low interest rates and money printing, which were meant to be emergency measures to help create a short-term boost to an economy that needs a little push over a hump, have become the norm in the global financial system and, even worse, the tools the global economy now relies on just to keep going. Can you imagine where the markets would be without 0% rates and over $4.5 trillion poured into the US economy in recent months, most of it into Wall Street and not into Main Street?

Cheap credit at 0% rates and money printing are allowing companies to take out loans that they don’t use to develop new products or gain market share. Instead, bonus-hungry CEOs of public companies use the loans to pay dividends and buy back their stocks, propping up their stock price, their bonuses, and the market. This was a main driver of the bull market since the Great Recession. 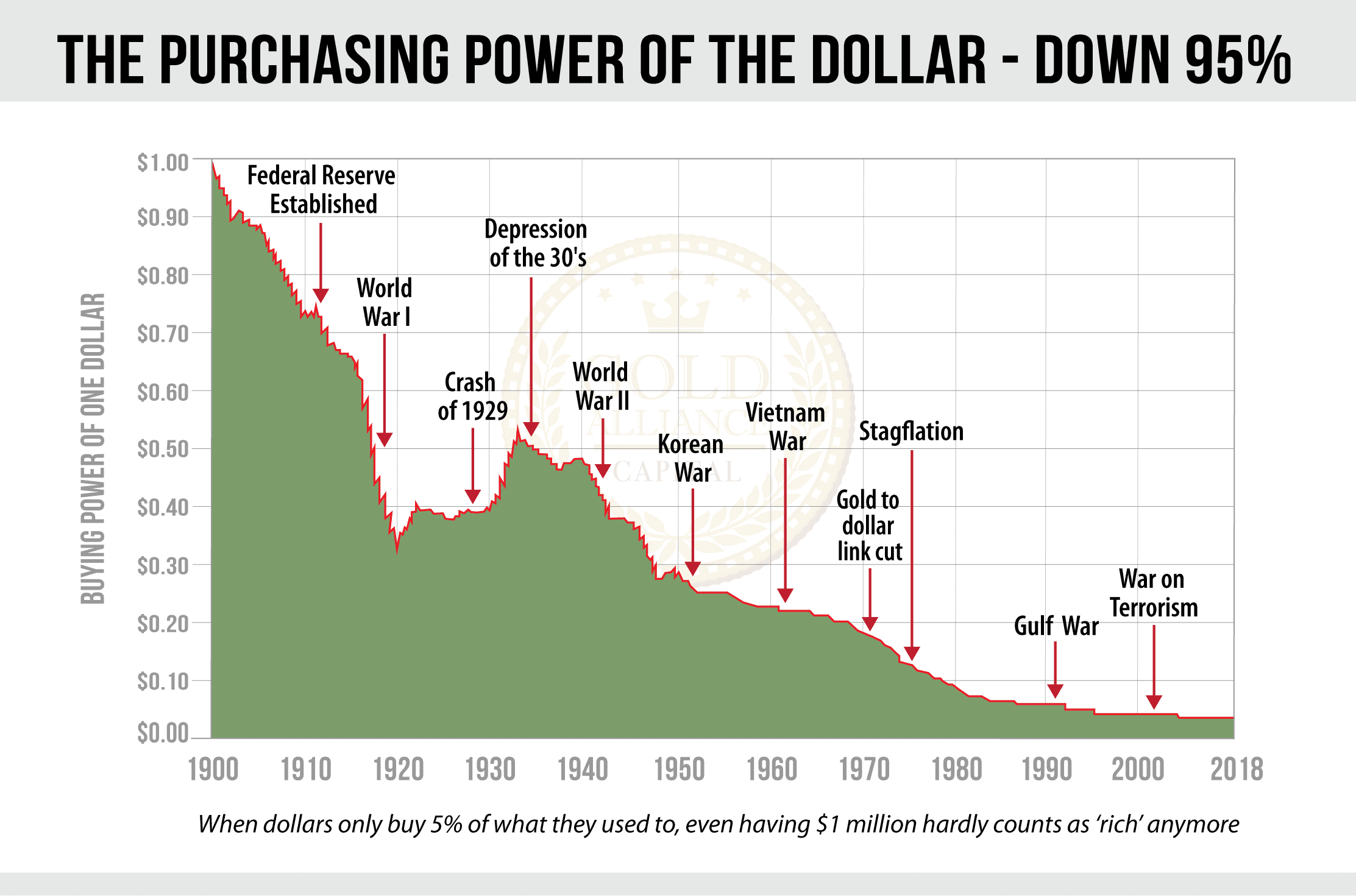 The demise of the dollar has already started

The downside to the Fed’s measures to increase the amount of dollars in circulation is that the value of the dollar is going down, which is a very dangerous game because it undermines the global currency markets. Just think about it: Why hold a dollar that has its value printed into nothing?

The fact that central banks around the world stopped buying US Treasuries and are unwilling to continue to finance our debt—like they did after 2008—is the beginning of the end. If you have the short life span of a fruit fly, you should not care about this since none of it is likely to affect the markets tomorrow. But if you have or plan to have a good chance of living through this decade, prepare for everything you were accustomed to to change.

Being citizens to the empire that controls the currency that rules the Earth, we enjoy an approximate additional 20% boost to our lifestyle. Take away the dollar as the reserve currency and all of us will lose 20% on average. What do you think will happen to the services you get from your municipality? To the education our children receive? To the quality of our health services? All this is now being put on the line by the Fed’s actions. Not to prop up Main Street, which is going through a mass extinction of small businesses, but to help Wall Street and the wealthy and to keep the stock market up—at your and my future expense.

This artificial market manipulation, when done at the scale we are seeing now, can go on for a few months—it may even last for one year—but if you plan to stick around, and if you hold your savings in the market, you should expect to experience a harsh crash back to reality.

When markets crash, and especially when currencies crash, gold—the currency of last resort that cannot be printed—skyrockets. It happened in the 1970s when the price of gold went up 8-fold and silver 11-fold. It happened again after 2009 when gold went up close to 3-fold and silver close to 5-fold. And now, we are looking at a setup where it will most likely happen again. Central banks around the world know that. That’s why they have been buying gold in the last few years at the fastest pace in history, and that’s why Bank of America set a price goal for gold at $3,000 in the next 16 months. They know what’s coming.

If you believe that our economy is strong, that the Fed can march us through a mild V-shaped correction, and that this decade will be exactly like the previous one (where stock markets, bonds, and real estate investments ruled the Earth), stay put.

If not, and if you believe we are headed to a major paradigm shift in our lifestyle and investments, it doesn’t mean you should sell everything you have, buy gold, and move to a bomb shelter… Far from it. Diversifying your wealth with gold means that you are moving a portion of your wealth to the 100% store-of-wealth safety of the precious metal. It means that you don’t think the Fed’s story about markets and our economy being fine in the short and medium term has a 100% chance of succeeding. They may be wrong, or maybe they’re giving us a bit of false hope to cheer us going forward, but you will be prepared.

Your percentage of doubt should dictate how much you need to diversify. Diversification is a hedge. We provide people that inquire with us about investments in metals with statistics on the percentage you need in order to be prepared for any type of crash that has happened in history. It depends on the type of investments you hold. It’s not 100%. It’s not even close to 50%. However, staying at 0% in gold and silver is putting all your faith in the financial markets of a debt-ridden economy with a crippling virus that’s creating havoc of historic proportions. You should choose wisely.