History has shown that once corporate debt reaches a certain level, we could face a recession, as seen in the chart below (Darker shaded lines mark our recent recessions). 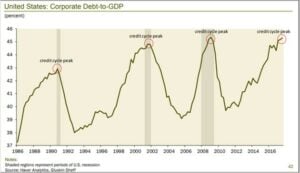 While the corporate debt to GDP ratio may still increase from its current point, it may not be by much. So, we are bound to see it drop soon, and when that happens, some lenders may want to sell. But to whom will they sell?

As we discussed in Part 1, borrowers have become used to easy access to obtaining credit. However, the same goes for lenders, who assume based on previous history that they will be able to exit their bonds at any time.

Today, we are entering a different scenario —but with much riskier high-yield debt. On the one hand, since 2009, corporate debt (especially, high-yield debt) insurance has exploded. On the other hand—and much worse—tighter regulations have discouraged banks from making markets of corporate and high-yield debt.

Due to the Dodd-Frank regulation established after the Great Recession in 2008, major banks have seen their market-making abilities reduced by 90%. Hedge funds and other non-bank lenders have made up for that, so for now bond market liquidity may be OK. However, these non-bank lenders, are not real market makers, and therefore they are not required to hold inventory or buy when investors want to sell. They are in the marketplace to make a profit for themselves and their clients, not to protect your assets. Thus, their bids to buy may disappear right when the market needs them most.

A marketplace dominated by non-bank lenders

These non-bank lenders include corporate bond ETF and mutual fund shareholders, which have both seen significant growth. They are designed for markets characterized by ample liquidity—characteristics that hardly describe our current market and will be far from applicable after rates jump another 50–100 basis points.

Imagine the scenario when these high-yield funds all try to sell at the same time and at whatever price they can get. And, to make matters even worse, many of these lenders are much more leveraged than we saw leading up to the Great Recession. Feeling confident that low interest rates and defaults would keep risks manageable, these lenders used borrowed capital when purchasing corporate bonds. According to S&P Global Market Watch, 77% of corporate bonds that are leveraged are “covenant-lite.” Meaning that borrowers can use other means than conventional ones to repay their debt, and, at times, they can force the lenders to lend them more money. In some sense, these borrowers can print their own money.

So, why did lenders decide it was a good idea to buy these bonds? The question is up in the air. It might make sense during a good economy, but during bad times it may bring us closer to a financial crisis. When the economy enters recession, a significant number of companies will lose their ability to meet their debt payments. And this is especially the case when the Fed—as we see now—increases the costs of rolling over debt, which trillions of dollars will need to do in the next few years. Covenant-lite lenders have taken this on themselves, whereas it would normally be the borrowers’ problem.

Reduced growth may lead to recession

When a company cannot meet its debt payments, one of its only options is to shrink. In other words, the company will lay off employees, sell off assets, or reduce inventory and investments. The result is a reduction in growth that, if it spreads, will lead to recession.

This is troubling, and Bloomberg explains why:

Companies will need to refinance an estimated $4 trillion of bonds over the next five years, about two-thirds of all their outstanding debt, according to Wells Fargo Securities. This has investors concerned because rising rates means it will cost more to pay for unprecedented amounts of borrowing, which could push balance sheets toward a tipping point. And on top of that, many see the economy slowing down at the same time the rollovers are peaking.

“If more of your cash flow is spent into servicing your debt and not trying to grow your company, that could, over time—if enough companies are doing that—lead to economic contraction,” said Zachary Chavis, a portfolio manager at Sage Advisory Services Ltd. in Austin, Texas. “A lot of people are worried that could happen in the next two years.”