Learn how to protect your retirement savings.

IN AMERICA — FIND OUT WHY It takes rain and sunshine to make a rainbow. We saw a brief, yet heavy rainfall in March 2020 as the stock market corrected, but since then it’s been pure sunshine for stocks. Investors are flocking to the rainbow, following the bull run to reap the huge rewards they are dreaming of while not thinking about rain.

If you believe in eternal sunshine, then, by all means, put all your money in stocks and stop reading this article. But if you are even just a little concerned that there are dark clouds on the horizon, this article is for you.

How bullish is the stock market today?

Some would describe the current stock market as exuberant. Others would use words such as excessive and “bubblicious.” Personally, I’d use all these labels. Let’s look at some numbers.

Record liquidity is flowing into the markets

Enthusiastic investors are pouring hundreds of billions of dollars into stock-based funds: Over the past five months, these inflows into global stock funds have exceeded the inflows of the prior 12 years combined.

While those numbers are staggering, they pale in comparison to the trillions of dollars the Fed and the government have pumped into the markets and the economy: $12.3 trillion — or 55% of gross domestic product (GDP) — in just 13 months. This is without any precedent in US history. To put the amount into perspective: the $12.3 trillion comes to $37,500 for every man, woman, and child in America. Think about the debt you just accumulated, and there’s nothing much you can show for it.

In the first quarter of 2021, trading volume jumped 40% compared to the previous quarter. It’s driven primarily by investors who bought up sectors that performed poorly last year, hoping these stocks will see a significant rebound.

A day barely goes by without a new record in the stock markets, but will valuations keep rising?

Currently, the S&P 500 is trading at a stunning 20.4 times forward earnings (an estimate of a company’s earnings for upcoming periods), which is around the levels we saw at the height of the dot-com bubble.

This is an indication of the optimistic expectations surrounding stocks. Currently, the market is trading at more than twice our GDP, which is a good indicator for corporate profits.

The chart below shows one of the most popular market indicators, the Buffett Indicator (orange line), which compares total stock market value to GDP. The ratio stands at 2.10, which means stocks are valued at 210% of GDP. It’s never been this high before. I want this to sink in: Neither before the crash of 1929 nor during the peak of the dot-com bubble have stocks been so historically high compared to the actual economy. Also note how previous high ratios often precede a recession (gray columns). 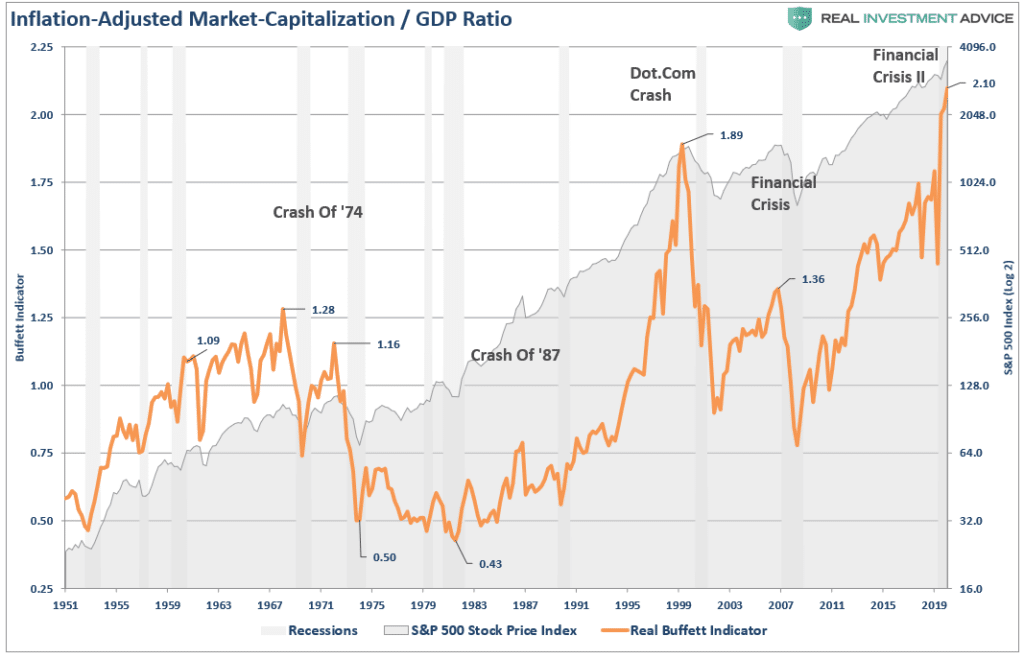 All this tells us a simple story: All bull markets end sooner or later. And once this bull market ends, it will end badly.

What goes up, must come down

Bull markets don’t die of old age. They die when prices have risen too high or too quickly, when markets change fundamentally, or when some external event forces investors to feel pessimistic about the market’s future and starts a sell-off.

We saw it in 2000 when the dot-com bubble burst. The bubble started forming in 1995, fueled by low interest rates, easy access to capital, market overconfidence, and pure speculation. Start-up companies that had yet to generate any revenue or profit — and, in many cases, didn’t even have a finished product — entered the stock market with IPOs (initial public offerings) that tripled or quadrupled their stock prices in a single day.

Investors were caught in a frenzy, overcome by the false belief that tech company values could only go up, that it’s a new type of economy, and that “clicks” would translate to profits. But eventually, capital dried up, and the majority of these start-ups, who were burning through their cash, folded one after the other, leading to the Nasdaq crashing and trillions of dollars evaporating into the air.

And we saw it again in 2008 when the housing bubble burst. Prior to it, investors had moved away from tech stocks and into the real estate market, and the housing bubble started forming. It was fueled by interest rate cuts, government policies that encouraged homeownership, and a wide range of financial market “innovations” that increased the liquidity of real estate and made access to capital easy… remember how people could get a mortgage with “stated income”?

Investors and homeowners came to believe that real estate values could only go up. But eventually, interest rates started ticking upwards, increasing the costs of purchasing and owner real estate, and investors stopped buying. Home buyers suddenly realized that real estate could in fact go down in value, and housing prices started dropping, which triggered a massive sell-off in mortgage-backed securities. From 2007 to 2009, housing prices dropped 19%, and the mortgage defaults led to millions of foreclosures.

There are many parallels today to the two previous bubbles: low interest rates, easy access to capital, overvalued markets, overconfidence in the markets, excessive speculation… not to mention that investors feel a false sense of security, like they did before the previous bubbles popped.

Can you time a bull market?

While we can determine if we’re in a bull market, we can only determine when a bull market starts and ends in hindsight. It might seem obvious why the tech and housing bubbles began and what triggered their collapse, but we don’t realize it until after the fact. And when we look back, it makes total sense each time why the bull market ended.

The same applies to the current bull market. Will it end because of inflation? Rising interest rates? A geopolitical crisis? We won’t know until after the event. We call these events “black swans” — an unpredictable event that is beyond what anyone could normally expect of a situation with potentially severe consequences. Such events are characterized by their severe impact and the insistence that they were obvious in hindsight.

We know that such events occur with some frequency and cause bubbles to pop.

“It is difficult to make predictions, especially about the future.”

It’s impossible to time the market. I can’t. You can’t. Not even the most talented investors can.

So, no, no one knows when it’s the best time to take their money out of the market. No one is ringing a bell at the peak of the market. And that makes the following advice quite logical: Since you don’t know when the bull market ends and when to remove your money from stocks, there should be no doubt in your mind that you must prepare your portfolio — and the earlier, the better.

Let’s return to our initial question:

Do you believe there’s no end to the bull run rainbow?

Whether your answer is a clear “no!” or “Well, it might…,” you absolutely should diversify your investments to protect them once the bull market ends and the rainbow evaporates.

And the best way to diversify is by investing a portion of your wealth in assets outside of the stock market, such as precious metals. Once the rainbow disappears, you’ll be outperforming those who believed in the dream of a neverending bull run and stayed all-in on stocks. It happened after the 2008 crash. Are you going to be sitting on the sideline when it happens again?

← Are You Ready for the Debt and Asset Bubbles to Pop? Why Should I Start Investing? →