The Stock Market: Is It a Bull Market or a Bunch of Bull? As life gets back to “normal” after the pandemic, we see what appears to be a shining bull market in the stock market. It’s currently at an all-time high as more and more investors are putting their money in stock. However, many experts are saying that the stock market today isn’t what it appears to be. Several of these experts are predicting a correction or worse: a crash within the next six months to a year.

We may be in one of the most exciting bull markets of recent history, but will you end up in the muck?

What does your pretty portfolio look like on the inside?

The unprecedented highs at the tail-end of the pandemic are giving your stock market portfolio a really glamorous look. This is especially true for those who were able to get skin in the game in late March 2020 after the market dipped.

Unfortunately, this pretty little portfolio has a dark secret. The stock market is filled with hot air, and a bubble is forming.

They always say to follow the money, but instead of following where the money in the current market is going, you have to see where it’s coming from to be able to look ahead.

Where is the money boosting the stock market coming from?

Take it back to the dot-com bubble in the late ‘90s and early ‘00s. Everything looked amazing as technology companies were peaking. However, they were overvalued: their share of total market cap (the total value of the market) was significantly higher than their share of profits of companies listed on the S&P 500, as this chart shows. 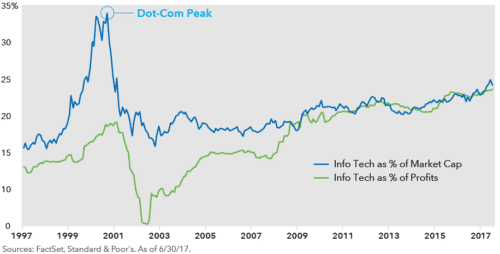 We are seeing the same happening now as Tesla is trading at over 900X its profits.

However, two other factors are inflating the market bubble and causing concern among market experts.

Let’s start with the first source: retail investors (or private investors). With stimulus checks giving some Americans additional funds, many have turned to the stock market to take part in the stock market rally. This is money they wouldn’t have otherwise put into the markets. And that’s great! That is part of what the stimulus checks were for: to stimulate the economy from various avenues.

However, these stimulus checks are made available in part by the Fed’s money printing, leaving us with a very real threat of inflation. In the same breath, a lot of these private investors funneling money into the market are trading for the first time, and some of them might not even be in the market for the long term. This means that they can pull their money at any time.

Just look at the GameStop incident that left hedge funds like Maverick Capital and Shellback Capital in a pretty sticky situation. While this “attack” showed us the power of the little guy, if you weren’t in on the Reddit game, you had no idea what was about to happen, and you (the private investor) could have been out a huge portion of your portfolio.

While private investors pulling money out of the market might lead to a stock market correction, and Redditors might direct their attention elsewhere, there is one group that we have to keep our eyes on because they have the potential to completely crash the market.

In an effort to stimulate the economy and get people to start buying, the government has brought interest rates so low that it’s created an opportunity for large corporations. These corporations are taking out billions in loans.

The loans aren’t the biggest problem, however; It’s where that money is going that is affecting the stock market so positively right now but with potentially severe consequences in the near future.

Where is the borrowed money going?

What are these corporations doing with the money? They’re funneling their borrowed money into stock buybacks … for their own companies! This, in turn, is boosting those corporations’ stock prices. Private investors, like yourself, are seeing these prices going up, so they’re buying into the rally.

This is all perfectly legal and predictable. It seems to be helping the economy, right? Wrong.

The problem lies in the fact that these companies aren’t adding value to their corporations. Their production hasn’t gone up. They aren’t adding to GDP. They’re filling a stock market bubble with hot air, and it’s incredibly fragile.

Because so much of the money in the stock market is coming from federal loans, when the bubble bursts and the corporations decide they can’t pay back their loans, we are in for a world of hurt.

Is the stock market bubble going to burst?

Experts are predicting a stock market crash, but there’s no real way to tell when or how it will crash. What most people know is that this fake boost is unsustainable. The market will inevitably crash.

Even if retail investors keep their money in the market, the billions of dollars that corporations are funneling into their own stocks is the biggest danger we’re facing. That leaves us to rely on these big businesses to deflate the bubble on their own. And if their morals created this bubble, we can really count on them to do the right thing.

And while many of us can attempt to predict how bad it will be, the truth is we don’t know. While severe crashes have been reduced to recessions and some crashes have made recoveries faster than others, it’s all out of our hands. And the Fed might not be able to help — interest rates are already very low, and money printing is on high speed, which are the tools the central bank would usually use.

So, in these uncertain times, how are you hedging your investments?

Is there a way to protect your investments from a stock market crash?

Yes. There are ways to protect your investments from stock market corrections, recessions, and crashes. This bull market has people roaring in the 2020s, but you might just end up in the muck if you don’t diversify outside of the stock market.

Take a look at how gold performs during major market corrections: 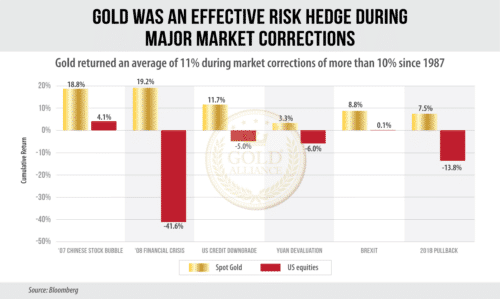 The only way to give yourself an edge over a market controlled by large corporations and the government is to take a portion of your portfolio out of that market and invest it where these corporations and Redditors can’t get their hands on it.

Luckily, there are a lot of great ways to diversify your portfolio without keeping your money in stocks and bonds. Precious metals investments are one of the best ways to hedge against market crises and give your portfolio an insurance policy. Consider the fact that most precious metals, like gold, perform in opposition to the stock market. So, if the stock market crashes, history has shown that gold can be a helpful tool in not only saving but also growing your retirement.

If you think this bull market in the stock market is going to last forever, don’t invest in gold. However, if you feel the way most financial experts currently feel — that a market crisis is just around the corner — precious metals are a great way to protect your financial future.

← Why Is the Fed Surprised by Inflation Hitting 13-Year High? 6 Signs Your Portfolio Could Be in Trouble Soon →