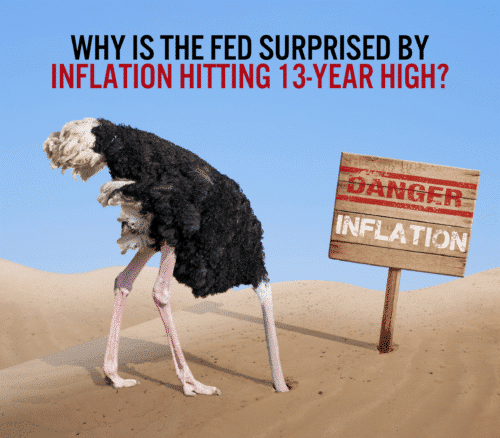 Inflation is here. Plain and simple. Analysts have been warning about it, and we’ve seen several indications of inflation over the past few months, so no one should be surprised.

No one… except the Federal Reserve.

“I was surprised,” said Richard Clarida, the Fed’s vice chairman, on Wednesday. “This number was well above what I and outside forecasters expected.”

So what is the official inflation data showing? The Labor Department reported its consumer-price index (CPI) jumped 4.2% in April from a year earlier, which is a significant increase from 2.6% for the year ending in March. Seasonally adjusted, consumer prices rose 0.8% from March to April — four times what Clarida expected. We haven’t seen inflation this high in almost 13 years.

Perhaps Clarida and other central bankers are “surprised” by the inflation numbers because they know they are the main drivers behind the inflation themselves?

Since 2020, the Fed has held interest rates near zero and purchased at least $120 billion a month in Treasury and mortgage bonds to keep the economy afloat and spark a recovery from the recession caused by the pandemic. Combined with the trillions of dollars in stimulus spending, these policies are flooding the market with cash, causing demand for goods and services to exceed supply, which then causes inflation to soar. That should be Economics 101 for central bankers.

As recently as in April, the Fed stated it would keep those policies in place, while the White House is planning to spend trillions of dollars on its Infrastructure Plan and other stimulus plans.

So… money printing and low interest rates aren’t going anywhere anytime soon. Wonder if the Fed can pull off another surprised look month after month when inflation data comes out.

But let’s return to the numbers.

Where are we seeing inflation?

The CPI measures what consumers pay for a basket of specific goods and services, including clothes, groceries, restaurant meals, recreational activities, and vehicles. There’s a lot of debate about whether this “basket” actually represents what we Americans are buying, which we’ll cover in a future article, but let’s look at some individual product categories to see where inflation is spiking the most.

Since January last year, prices on new cars have gone up 9.6%. But prices on used cars have increased by even more: a stunning 16.7%. That’s almost surreal — used cars are supposed to depreciate in value. It’s also the biggest one-month increase since the government started tracking prices in 1953.

According to NielsenIQ, who collects data on consumer product prices, consumer goods have become over 10% more expensive over the past year. Some items have exploded in price; seafood prices, for instance, have jumped 18.7% just in the past three months! Major appliances on average rose 10% year-over-year, with laundry appliances rising 24%.

And according to the Wall Street Journal, US home prices are rising at the fastest pace in 15 years, as measured by the S&P CoreLogic Case-Shiller index, which reported an 11.2% annual gain in January this year, the highest rise since February 2006. And we’re already seeing housing bubbles pop up across the country.

Further price hikes are on the way

Just a few weeks ago, Procter & Gamble announced that they will be increasing their prices on baby care, feminine care, and adult incontinence products due to increased costs on raw materials. The price increases will be in the mid-to-high single digits, says P&H — so, well above the CPI.

And they are just one of many manufacturers in that boat — Kimberly-Clark and Coca-Cola have announced price hikes as well.

Berkshire Hathaway, who owns one of the nation’s largest homebuilders, Clayton Homes, along with companies such as Benjamin Moore paints and Shaw flooring, is telling consumers to expect higher prices as well.

“We are seeing very substantial inflation,” chairman and legendary investor Warren Buffett said at the latest Berkshire shareholder meeting in May, pointing to how inflation is rampant throughout the supply chain. “We are raising prices. People [suppliers] are raising prices to us.”

Why is inflation rising?

One of the reasons for prices to go up is the pent-up consumer demand from people having been locked down for so long. Combine this with tight supply — many businesses are closed or are operating at reduced capacity. That causes prices to rise, but it’s, in theory, temporary.

However, there are more-permanent factors that are driving up inflation and could continue to do so for a long time.

For instance, governments across the world are proposing higher taxes, such as carbon taxes and corporate income taxes. This is inflationary since increased taxes means higher costs for corporations that will eventually pass on to consumers.

But the main culprit is money printing. And we’re talking trillions of dollars here. Just this year alone, the US federal government is pushing for spending bills worth more than $11 trillion. That’s in addition to the trillions in deficit spending from 2020.

Every single dollar in these historic spending bills will be paid for with borrowed money, further increasing the national debt. Who’s lending the government all this money? The Fed… The central bank can simply create trillions of dollars and loan it to the government.

And the Fed is good at what it’s doing. In 2020 — in just one year — the Fed almost doubled its balance sheet:

And that’s exactly what we’re witnessing right now. Are you really that surprised, Mr. Clarida?

Inflation is here. Mr. Clarida and his fellow Fed officials can be surprised or dismiss it all they want — it’s not going to make inflation disappear. But the Fed isn’t just dismissing inflation: the central bank has called for the government to spend even more money, which would mean even more money printing.

How does inflation impact your investments?

Not only is inflation consuming more and more of your expense budget, it is also taking bites of your investments. Inflation lowers the purchasing power of your dollars and your dollar-denominated assets, such as stocks, which make up the largest part of most Americans’ investment portfolios.

If stocks comprise most of your portfolio, then inflation could mean that you won’t be able to afford the standard of living during your golden years that you had hoped and planned for.

If you experienced the ravaging inflation of the 1970s, you’ll remember just how horrible it was. Anyone with retirement savings saw their retirement being postponed for years, but it was even worse for anyone relying on fixed income such as pensions, annuities, and Social Security since they were able to afford less goods and services each month. As a result, many retirees were pushed into poverty during that decade.

Hopefully, we won’t see inflation spiral out of control like in the 1970s, but once inflation takes hold, it’s difficult to combat — especially with limited tools in your tool box.

What can the Fed do about inflation?

The traditional tool central banks use to fight inflation is raising interest rates, which increases the cost of borrowing and the returns on savings and investments, thus lowering consumption and stabilizing prices.

The Fed used the tool back in the 1970s when inflation skyrocketed. It ballooned interest rates to as high as 20%.

But it will have a very hard time using this tool today. If rates hit even mid single digits, financial markets across the globe would crumble. Stocks would crash… real estate would crash… and the US government would default on its $28+ trillion debt.

No one can afford “regular” interest rates anymore — everyone’s gotten used to near-zero rates. The market won’t — and can’t — tolerate even 6% or 7%.

Of course, the Fed knows this. At most, they’ll raise rates by a symbolic half percentage point once or twice. But they’ll need to ignore higher inflation so they can prevent a full-blown market collapse.

So, should the Fed acknowledge inflation one day, there’s not much they can do about it without financial destruction to the markets.

With the Fed “out of play,” you’ll need to take control of your finances yourself to protect your investments.

What can you do to protect your investments?

Since you’re reading this article on our website, you won’t be surprised (not even “fake” surprised like the Fed) when I tell you that an investment in gold can help you achieve financial security and protect your savings against inflation.

In fact, gold thrives during inflation. During the double-digit inflation of 1976–1980, gold rose by 2,100%! As the dollar was devalued, it took more of it to buy a bar of gold, and as the value of gold rose, more and more investors ran to gold’s safety.

And once you own gold as an investment, the Fed’s money printing and suppression of interest rates — which are just increasing inflation — are actually benefiting gold investors as these actions push the price of gold higher. When was the last time the Fed worked for you?

Kevin Troy In his more than 17 years in the financial industry, Kevin has focused on precious metals as investment assets. He has penned numerous articles on buying and selling precious metals and about the best entry and exit strategies for the financial markets. Thousands of clients have benefited from Kevin’s expertise and learned to protect, preserve, and safeguard their investments with precious metals. Kevin has been with Gold Alliance for more than 3 years as a leading Sr. Portfolio Manager, and he oversees a large portion of our clients’ portfolios.