We are told we’re in the midst of an economic recovery. News stations are reporting record highs on Wall Street, and we hear nothing but positive responses left and right.

“The housing market is booming!”

And then came the report on second-quarter output. But let’s begin where things really started going wrong.

The Covid pandemic and the ensuing lockdowns caused the worst economic decline since post–World War II. As Covid surged around the country, consumers began hoarding goods. I’m not just talking about the Great Toilet Paper shortage of March 2020. The hoarding continued well after that. And it wasn’t just toilet paper: Canned goods, meat, and fuel were also seeing major shortages throughout 2020 and into 2021.

But overbuying from consumers wasn’t the entire problem.

Take a look at the lumber industry over the past 15 months. Covid forced lumber production to slow or even halt. Meanwhile, mass wildfires reduced the supply of trees. It was so bad that, even when lumber companies were able to get back to work, there was a disruption in their ability to produce.

The result: Lumber prices skyrocketed to the point it drove up the cost of home building and (more noticeably) real estate.

This supply-side inflation was something we expected, and it’s the setup to what we are seeing now.

Here are the key facts showing us that  the economy is not in good shape.

Quarterly reports are shaky at best

Q2 reports for 2021 show that output only reached the levels we were at in 2019, despite the fact that the recession technically ended in April of 2020. At this point (if our economy is as strong as they’re saying), we should be well above 2019 levels. Oh, and the short trend is not our friend since the GDP growth rate is slowing and even seems to be reversing. 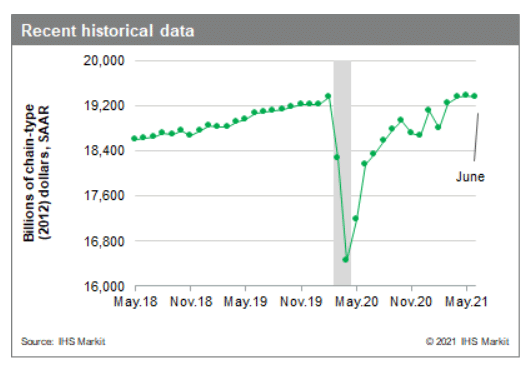 Our GDP can’t keep up with the overvalued stock market

If our GDP growth doesn’t pick up to meet the current value of the stock market, valuations are so out of whack that a possible stock market crash will be deeper than we have seen in 2008. Below is a chart showing the most reliable stock market indicator according to Warren Buffett, “the Buffett Indicator,” which compares the total value of the US stock market to GDP. The market has never been this overvalued before — we’re in uncharted territory. And see how every time stock valuations compared to GDP were significantly over the trend line, we corrected to under the line. See how far we are now from the trend — seems like a historic correction is coming. Let’s not forget about the Delta variant causing more shutdowns — in the summer, no less. As schools begin to open, the threat of the Delta variant could very well bring us back to another set of lockdowns and mandates, which will affect our economic growth.

As if one major pandemic wasn’t enough, we could be facing another one before we even recover from the first.

As things are starting to get back to “normal,” and thanks to the trillions of dollars pumped into the economy, US consumers and businesses are starting to spend more money. Part of the increased demand is going towards imported goods. But other countries are struggling, so US exports haven’t been able to match the increased imports. The result? The largest trade deficit in history: $75.7 billion.

So, how are we still afloat after 15 months of this?

The Fed has the printing presses running

For most Americans, the economic decline of 2020 was the worst economic downturn they saw in their lifetime. The only thing that held up the US economy was the Fed printing more and more money.

Of course, this money printing is accompanied with debt, and this debt will need to be carried by us and is going to come back to haunt us in the long term. But even in the short term, it’s causing inflation rates to soar. The inflation rate for the year ending in July, 2021, was 5.4%. When you consider the fact that the Fed sees a 2% inflation rate as healthy, this is definitely cause for concern.

But they’re going to raise interest rates, right? Nope. The Biden administration has asked the Fed to keep interest rates low in order to encourage more people to borrow. Our economy is slowing down, not recovering, and the government is trying to encourage spending in every which way it can. For the first time, it does not seem like it’s working the way it has in the past.

What can you do about it?

As the overvalued stock market continues to set records and GDP growth slows, with signs pointing to a significant correction, you need to take defensive actions to protect the gains you have made. The market is now at the highest point in history. Basic “grandma” logic of buying low and selling high should tell you to not be 100% in an asset that has a higher chance of going lower than going higher. You should create a hedge for your retirement savings, just in case the markets fail. It’s time to start diversifying outside of the market.

The very best thing you can do is take a portion of your IRA or 401(k) out of the stock market and invest that portion safely.

Where can you invest safely?

If you look at the real estate market right now, it’s inflating rapidly due to a number of factors, including the soaring price of lumber, limited supply, ultra-low interest rates, and an abundance of cash printed by the Fed that is pooling into every asset class. Real estate is somewhat correlated to the stock market as both are dollar-based investments — both rely on the dollar to be strong in order to remain strong, and both of them need interest rates to remain as low as they are now.

The stock market and real estate surged in the early 2000s to see both crash in 2008. And they have been surging together again since 2011. I have nothing against real estate, but I think it’s a much poorer diversiticiation to the stock market than people think, as for 2 decades these assets work in tandem, because of the Fed’s credit cycles.

In short, you should look for a diversifying asset that is not backed by our paper dollar.

That’s where gold comes in. When looking for an asset that will serve you as financial insurance and has a track record of diversifying well against stock market corrections and inflation, look no further than to gold. Stock market correction, inflation, and geo-political angst will keep you up at night when your retirement depends on paper assets touted by Wall Street. With a portion of your wealth in gold, you’ll have a good night’s sleep.

Darwin has over 30 years of experience in the investment and risk financing sectors, focused on precious metals as investment assets. As an avid writer, Darwin has published multiple articles about investing in gold and silver, with a focus on their ability to protect and grow his clients’ investment portfolios. As a leading Sr. Portfolio Manager with Gold Alliance, Darwin oversees many of our clients’ portfolios.
← Egyptian Billionaire Sawiris: Allocate This Much to Gold Is Powell Planning a “Volcker Shock”? →